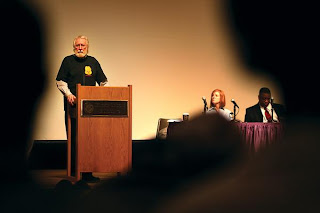 Panel encourages legalization of drugs
February 14, 2007
By Timothy Mensing
The Daily - University of Washington newspaper
http://www.thedaily.washington.edu/article/2007/2/14/panelEncouragesLegalizationOfDrugs
Leading members from the King County community met last night in the HUB Auditorium to discuss what has been coined the "War on Drugs."
The discussion included socioeconomic and interpersonal effects of current U.S. drug policy.
Those present, other than interested students, included a lawyer, a former Seattle police chief and a Seattle city council member, the three making up the panel.
Students attended in pursuit of a better understanding of the subject, along with the hope that discussions like these would spur alternative paths to current U.S. drug policy.
"[The consequences] of the current state of things is simply not represented enough in the mainstream," said junior Anton Sirotin.
The panel focused on discussing these consequences and providing alternatives. All supported the legalization of drug use with regulation.
Several organizations, including Physicians for Social Responsibility (PSR), sponsored the event.
The first to speak was Norm Stamper. With a Ph.D. in leadership and human behavior, Stamper has 34 years of police experience, seven of which consisted of overseeing Seattle law enforcement as Seattle police chief.
His speech began by recalling the beginning of the War on Drugs, enacted and named by former President Richard Nixon.
This War on Drugs came to represent, moreover, "a war on people," without any clear victories to be had, Stamper said.
In a country with 5 percent of the world's population, 25 percent of those incarcerated in the world are housed in U.S. prisons, Stamper said.
Thirty five percent of those jailed are in on charges of drug possession. Along these lines, there are more illegal drugs at cheaper prices now than at any time in history, he said. In the last year, 1.7 million people were jailed on non-violent drug charges.
"What I choose to put in my body is my own decision," Stamper said. "It is only when that decision affects others in a negative way should there be legal intervention."
Larry Gossett, chair of the King County Council, expanded on this idea.
"A 17-year-old goes to jail on charges of possession for 16-21 months and comes out harder than the rock he sold," he said.
Although consisting of only 12 percent of the U.S. population, more than 50 percent of those in jail are African Americans. Of these, 40 percent are there on drug charges, he said.
Rachel Kurtz, deputy director of the King County Bar Association, offered alternatives to the current U.S. drug policy.
Rather than leave the contents of the drug unknown, legalized drugs would offer substance information, she said.
These drugs would share the same laws as alcohol, such as limiting purchasing power to those 21 years old and older.
All panel members supported the idea of diverting law enforcement funds into community programs, such as clinics dealing with addictions.
Audience members resonated Sirotin's sentiment about increasing awareness.
"More people need to hear about the issue," said senior Daren Keck.
Reach contributing writer Timothy Mensing at development@thedaily.washington.edu.
Posted by kurtz at 11:13 PM

a little bit about me...

kurtz
Seattle, Washington, United States
i am an attorney working on expanding the dialogue about the war on drugs with other attorneys around the country, although this blog is mainly about evolutionary extinction and androids.